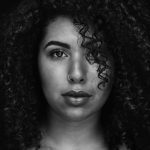 My name is Oumnia Guigui. I’m a songwriter and backing vocalist and live of and for music. Born and raised in Zeeland, I started at the ArtEZ Academy of Music in Enschede five years ago and here I am – the end of my new beginning is approaching.

My name is Oumnia Guigui. I’m a songwriter and backing vocalist and live of and for music. Born and raised in Zeeland, I started at the ArtEZ Academy of Music in Enschede five years ago and here I am – the end of my new beginning is approaching. More than ever now, I ask myself the questions: “Am I doing everything right? Should I have approached it differently? Did I make the right choices? Am I happy with where I stand?”

In 2015 I graduated as performing artist/actress in Tilburg. My tutor and singing coach in that program was teaching at the time at the ArtEZ Conservatory in Enschede. He was the one who convinced me to continue my studies there. Before I started at the conservatory, I had no idea what to expect.

I knew I wanted to make music and learn everything about the profession. But I had to make a difficult choice between the Vocals program and the Songwriter program at the Academy of Pop Music. Writing has always been one of my passions, but professional songwriting is really a whole different ballgame and I had only just taken my first steps in that direction. For that reason, I finally opted for the Vocals direction while taking extra writing classes and a songwriter minor in my final year.

A new beginning is always a little scary. That’s how I remember my first encounter with ArtEZ, too. All of us in a beautiful concert hall, Music Therapy, Music in Education, Media Music and Academy of Pop Music, all mixed together. My love for my discipline was also the source of my greatest fear. What if I wasn’t good enough?

I experienced the study itself as quite the challenge. When I walked into ArtEZ, I came from a background where fake it till you make it is just about tattooed on your forehead, and the ‘free exploration’ of art education in general is something that my brain, which really needs structure and regularity, finds difficult to process. I had only just finished four years of that and here I went again. Off the deep end, where all that freedom should result in finding the message you want to express to the rest of the world. To deal with all this irregularity, I had to return frequently to my awareness of who I am, what drives me and what message I want to express with my work.

The Voice of Holland

In my second year (2016) I decided to participate in a commercial TV show named The Voice of Holland. Something you wouldn’t necessarily expect from me, if you heard or knew my work with its soulful urban sound. I went primarily to get to know as many people as possible, especially back-stage, so that I’d have a network of people to tap into whenever and wherever I needed them.

The first question I always get is: “did you really get anything out of that?” My goal was to stay in until the knock-outs and absorb everything and everyone like a sponge. At that, I succeeded. Going for next rounds in the competition is fun, but even for the winner, that journey ends at some point. So to be straight – did I reach my goal? Yeah. At the same time, I could also say ‘no’, because I’ve rarely had to use the network I built through it. Everything seems to be running quite smoothly from my own initiatives. Slow but steady. The way it feels right for me.

During this TVOH period, I was spotted by a girl who had booked me in my student days in Tilburg for a living room concert she had organized. Coincidentally, five years later she was working for a management office with a portfolio of big names. The concert for which she booked me back then was the first show I filled entirely with my own work. Thanks to this opportunity, I was approached for a writing camp for one of her big artists.

Of course, music isn’t always a world of peace and harmony. As for finances, it remains a difficult story. Despite that, I’ve sometimes found it more of a challenge to answer for myself to others than to actually rake in the cash. Besides working as a songwriter, I have two booking offices where I can be booked for weddings, parties and events, and my main source of income is working as a backing vocalist. I have a few colleagues for whom I sing regularly. Especially in the summer months, they have great gigs for me, but in general I work freelance for anyone who needs a backing vocalist.

As an entrepreneur there are many ways to create a steady income for yourself, also within the arts. Working from a vision, meeting the right people and having the courage to “fail” are, in my view, what makes or breaks you. You can teach, do freelance work, join competitions or, in my case, work in a clothing store. Those kinds of jobs, too, are sometimes necessary to be able to invest in your music.

I realize very well that now that the fact that my student grants are ending after my graduation will result in a different lifestyle than the one I have now. Still I have faith that after 9 years of studying, work experience and networking I should get to where I need to be.

Tips for the next generation of students

If I could share something with the next generation of students it is this: always trust your intuition and believe in yourself. You’ll face headwinds. Projects won’t go the way you hoped, some will unexpectedly be cancelled, and others again will suddenly accelerate while you never expected them to. It’s all part of it! It’s OK if something doesn’t go as planned, it’s OK if you’re really at your wit’s end, it’s OK to change plans and it’s also OK to doubt whether you were made for all this. (Buckle up conservatory students: in year three you’re going to doubt EVERYTHING, all of a sudden. We’ve all been there!)

Listen to opinions and advice from outside, take them to heart, relativize them, let them go if they don’t speak to you. Live from your heart. You’ll often get questions or comments with the word “successful” in them. Ask yourself: what does success mean to me? Because there is no right or wrong answer to the question “what is success?” Keep experimenting, keep exploring, keep educating yourself – also outside of ArtEZ – and your mission, vision and individuality will emerge naturally.

A day with Oumnia

To give you an impression of how my life looks now, I often go around with my camera. The vlog below gives you a peek into a typical Oumnia week. Three gigs, a writing camp, business meetings and a studio job.